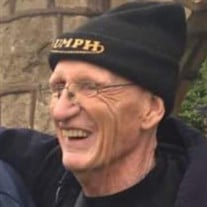 Jim Dale Donahe, 84 of Callender, formerly of Fort Dodge, died peacefully at home with family at his side April 4, 2022. Born January 13, 1938 to Harold and Irene (Echelberger) Donahe, he attended Fort Dodge schools and served in the US Army from 1956 to 1958 at Fort Greely, Alaska where he was a motor pool driver and worked for the Arctic Test Board testing military equipment for cold weather conditions. Jim was married for 48 years to Gwendolyn (Johnson) Donahe until her death in 2005. He lived most of his life in Fort Dodge and moved to Callender in 2014 to reside with his daughter Julie and her husband Rick Vinsand. Before his retirement, Jim worked at Gus Glaser Meats for 11 years and National Gypsum for 19 years. Jim enjoyed riding motorcycles, fishing, skydiving, casino and simply being outside. His greatest passion was carving objects out of any type of wood, including tree trunks and telephone poles. His front yard was full of a variety of large carvings relating to whatever inspired him – mostly from nature- including a totem pole, a corncob with a grasshopper attached, a morel mushroom, bears, Indian heads, owls, eagles and fish. He recently expressed that his favorite thing to carve was an eagle. One of his carvings earned him a first place People choice award at Fort Dodge Art in the Park event. Jim was always creating something, never duplicating any pieces of work, with “Creativity Has No Pattern” as his motto. He greatly enjoyed outdoors tasks on the farm in Callender, among his favorites, were operating the riding mower and tractor. A nature lover, he could also name nearly every tropical fish breed and found great joy in watching and identifying birds outside his window. Jim was preceded in death by his wife Gwen, infant son Joseph, grandson James Dale Donahe, parents and two brothers, Darwin (Sonny) and Larry. He is survived by his children Julie (Rick) Vinsand of Callender, Theresa (Dean) Peterson of May Township, Minn. James (Jody) Donahe and Laurie Bailey, both of Fort Dodge, sisters Colleen Boyd of Littleton, Colo., and Marlys (James) Cruchelow of Ankeny; brother-in-law Duane (Liz) Johnson of Hudson, Fla.; 14 grandchildren; many great-grandchildren; nieces and nephews. Jim enjoyed the simple things in life, in his honor, the family asked visitors to dress casually in their favorite blue jeans and tee-shirt preferably, Harley, favorite motorcycle tee or military. Visitation will be held from 4:00 – 7:00p.m. Wednesday at Gunderson Funeral Home and Cremation Services. Funeral services will be held at 11:00 a.m. Thursday, April 7, 2022 at Gunderson Funeral Chapel with visitation one hour prior to the service. Military honors will be presented by the U.S. Army and the VFW Post 1856. Memorials may be left to the discretion of the family.

Jim Dale Donahe, 84 of Callender, formerly of Fort Dodge, died peacefully at home with family at his side April 4, 2022. Born January 13, 1938 to Harold and Irene (Echelberger) Donahe, he attended Fort Dodge schools and served in the US Army... View Obituary & Service Information

The family of Jim D. Donahe created this Life Tributes page to make it easy to share your memories.

Send flowers to the Donahe family.