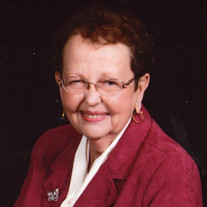 Joanne Wiese, 80, of Fort Dodge passed away on Friday, August 7, 2020 at Fort Dodge Villa Care Center. A visitation will be held from 5 to 7 p.m. on Tuesday, August 11, 2020 at Gunderson Funeral Home and Cremation Services. A service will be held 10 a.m. on Wednesday, August 12, 2020 at Good Shepherd Lutheran Church. Interment will take place at 1 p.m. at Luckow Cemetery near Breda, IA. Joanne was born on June 4, 1940 in Lake City, IA, to Hiko and Alma (Mohr) Frank. Joanne was baptized and confirmed at Peace Lutheran Church in Ulmer, IA. The oldest of three children, Joanne grew up on the family farm in rural Lake View. She attended a country school and graduated from Lake View/ Auburn High School. On June 14, 1959, Joanne was united in marriage to Arland Wiese at Emmanel Lutheran Church in Lake View. The union was blessed with 4 sons; Michael, Gregory, Dana and Mark. The couple later divorced. Joanne worked for Mid Continent Lumber Co. and later at Walmart where she retired in 2007. At a dance in 1990, she met her long-term companion, Dave Nelson. They both enjoyed traveling to California and Florida to see family and friends. Joanne enjoyed bowling for many years and went to numerous tournaments. Joanne was an active member of Good Shepherd Lutheran Church in Fort Dodge where she was in the church choir and the Lutheran Womens Missionary League for many years. Joanne was admitted to the F.D. Villa in August 2018 where she was a resident until her passing. Joanne is survived by her sons, Mike (Wanda) Wiese of Fort Dodge, Greg (Candy) Wiese of Huntington, IN, and Mark (Tracey) Wiese of Union City, CA; her long-time companion David Nelson; sisters-in-law Elaine Frank and Marcia Frank, both of Lake View; grandchildren, Christian, Carson, Jacob and Tori Wiese; step-grandchildren, Tony and Robert Taylor; 3 great grandchildren, Amelia Wiese, Selene Wiese, and Ethan Wiese; and 6 step great grandchildren. Joanne was preceded in death by her son Dana, her parents, her brothers Verlin and Jerel. In lieu of flowers, memorials may be directed to sending Good Shepherd Lutheran kids to camp.

Joanne Wiese, 80, of Fort Dodge passed away on Friday, August 7, 2020 at Fort Dodge Villa Care Center. A visitation will be held from 5 to 7 p.m. on Tuesday, August 11, 2020 at Gunderson Funeral Home and Cremation Services. A service will be... View Obituary & Service Information

Joanne Wiese, 80, of Fort Dodge passed away on Friday, August...

Send flowers to the Wiese family.