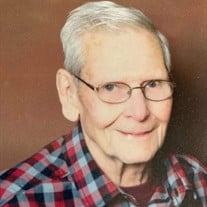 Kenneth Keith Cunningham passed away May 1, 2022, at his home at Windsor Manor in Webster City, IA. A celebration of life will be held 10:30 a.m. Saturday, May 14, 2022 at Gunderson Funeral Home and Cremation Services. Entombment will take place at the North Lawn Mausoleum. Kenneth was born December 14, 1927 in Electra, TX to Roy Sylvester Cunningham and Julia Wilhelmina Wittenbach Cunningham. He got his schooling in Electra, TX. He went to Fort Dodge at the age of 18. The day he got there he got a job with the City of Fort Dodge and worked there until he retired at 62 years old. He married Madelyn Jones in 1952. They had one daughter, Dawn Marie. They divorced. During this time he served in the US Army. In June 1977, he married Lillian Utley Halder and did a lot of traveling, mostly by motorhome. In summer they traveled to Minnesota and Canada and did a lot of fishing. They then came home and did gardening and wood working. He made several pieces of beautiful furniture. In October, Ken and Lil would get the camper ready and take off for warmer climates. They would spend winter in California, Arizona, Florida and the last 18 years they spent winter in Texas. It was a great life for them. Kenneth is survived by his wife, his daughter, Dawn (Gene) Walker; one grandchild, Chris; five greatgrandchildren, Austin (Makala), Alexis, Ashley, and Adam; and one great-great-grandchild, Jonathon; his step-children, Tom (Kim) Halder, Terry (Mary) Halder, and Marty Duffy; step-grandchildren, Nick, Tanya, Holly, Adam, Heather, Tiffany, and Troy; and 14 great-great-step-grandchildren and several nieces and nephews. He was preceded in death by his parents, three sisters, one brother and a step-daughter, Angela Duffy.

Kenneth Keith Cunningham passed away May 1, 2022, at his home at Windsor Manor in Webster City, IA. A celebration of life will be held 10:30 a.m. Saturday, May 14, 2022 at Gunderson Funeral Home and Cremation Services. Entombment will take place... View Obituary & Service Information

The family of Kenneth "Kenny" Keith Cunningham created this Life Tributes page to make it easy to share your memories.

Send flowers to the Cunningham family.