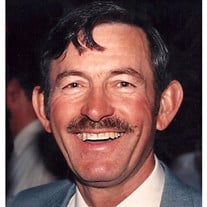 Kenneth Melbourne Rasch – born 8/14/28 died 5/2/2019 The quality of a person’s life relates to how it has touched others. Kenneth Rasch was born at a very young age, grew up on a farm near Fort Dodge and later decided that being an only child was not his vision for a family of his own. He married Jane Devlin in November 1951, proceeding onto a deer hunt in Wyoming for their honeymoon. They began a family that grew into twelve kids and traveled in a converted school bus they named Henrietta on their summer adventures. A gas station attendant once asked, “are all those kids yours or is this a picnic?” Ken responded,“they are all mine and it’s no picnic!” It’s been said that anyone that has ever known Kenny, has a “Kenny story”, appreciating his sincerity, passion for life and true sense of adventure. As a young pilot, he flew baby chicks on a delivery route across Iowa in his Stearman aircraft, his scarf blowing in the wind. Legend has it, that he had once flown his airplane, inverted, under the Great Western train trestle in Fort Dodge, although his children have never found video evidence to support this. Ken and Jane have always been involved in community functions and worthy organizations that improve other people’s lives. They have been long time supporters of the Fort Museum and were honored as Grand Marshalls of the Frontier Days Parade. In later years, Ken co-founded the Fort Dodge Rifle and Pistol Club pursuing a pastime as an expert in Colt firearms, and adventures in cowboy action shooting. Kenny joined Jane in the Catholic Church, devoted in their faith all of their lives, passionately supporting the sanctity of life, especially the little tiny unborn babies. Kenneth served as a 4th degree in the Knights of Columbus. Kenneth founded Rasch Bulldozer Company in 1947, recently retiring as President from Rasch Construction Inc. as the company celebrated its 70th anniversary. Amid raising a brood of curious and active children, as well as running the construction company, he served many roles in the Land Improvement Contractors Association of America, including national president. This was accompanied by his ownership of Land and Water Magazine, published for 43 years in Fort Dodge. Rasch also served in the Army National Guard and was an Arizona Ranger. Kenneth Rasch is preceded in death by son Kem Joseph Rasch and daughter-in-law Marcell. He is survived by his wife Jane of 67 years, children; Kevin Rasch (Shelley) Benson AZ, Molly Van Arnam (Patrick) Minneapolis MN, Amy Dencklau (Steve) Fort Dodge, Sara LaBruzzo (Tom) Fort Dodge, Martha Steinkamp (Ron) Fort Dodge, Joel (Cyndi) Fort Dodge, Teresa Brown (Larry) Fort Dodge, Melissa Maddux (Daniel) Kansas City MO, Justin Rasch (Cherissa) Fort Dodge, Ann Crouse (Michael) Manson, and Greg Rasch (Theresa) Spencer. Ken leaves the legacy of 42 grandkids and 70 great grandkiddos. The Mass of Christian Burial will be held 10:00 a.m. Monday, May 6, 2019 at Sacred Heart Church. Burial will be held in Remington Cemetery. Visitation will be held Sunday, May 5, 2019 from 5:00p.m. - 8:00 p.m. followed by a rosary at Gunderson Funeral Home & Cremation Services. In lieu of flowers, and in honor of his pro-life advocacy, memorials can be left with: Obria (Formerly Informed Choices of Fort Dodge) 328 S. 8th St. Fort Dodge IA 50501.

Kenneth Melbourne Rasch &#8211; born 8/14/28 died 5/2/2019 The quality of a person&#8217;s life relates to how it has touched others. Kenneth Rasch was born at a very young age, grew up on a farm near Fort Dodge and later decided that being... View Obituary & Service Information

The family of Kenneth M. Rasch created this Life Tributes page to make it easy to share your memories.

Send flowers to the Rasch family.