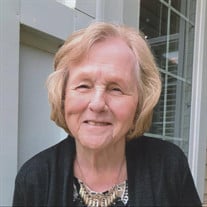 Wednesday, February 16, 2022, Mary Frances Jordison peacefully journeyed into her Savior’s loving embrace guided by her husband of 62 years. Mary journeyed the past eight years with dementia supported by family and friends. The past 18 months were spent with Rolling Green Village (Nevada) staff. Mary was born in Fort Dodge, Iowa on April 2, 1940. She was the third of five children born to Lawrence and Helen Davis. Mary enjoyed more than 62 years of marriage to her high school sweetheart, Leonard (Bubby) Jordison. Two hearts became one on a snowy winter evening, February 21, 1959. Together, they raised two sons (Steven and Jeffrey) and one daughter (Cynthia). Growing up in Fort Dodge, her family of seven people moved from in-town to the “farm”. She was an active student who became president of her high school Future Nurses of America, Pep Club member, secretary of Senior Y Teens, in addition to assistant secretary in the high school office. Even though she was too young to work as a server at the local “Dog House”, Mary was tasked with slicing potatoes in the basement. Even before graduating from high school in 1958, she was embraced by high school friends which morphed into the ladies “potluck” group of six ladies who continue to share even after 60 years. Mary enjoyed raising three young children. Her leap into public cooking was launched at the Dairy Sweet in Emmetsburg. The next big career move was chief line cook at the now Gateway Center Hotel and Conference Center. There she cooked and baked for greater than seventeen years. One evening she rushed home to share how she cooked then room served an early morning breakfast to Hank Williams, Jr. Again, she forged a new group of long-term girlfriends who were fellow cooks. She was famous for her delicious potato salad, scotcheroos, sugar cookies, coffee cake, and cherry delight. Many a time people would ask her kids, “what did your mom make?”. Leaving the hectic kitchen life, Mary was hired as cook at the Scandia Tea Room in downtown Ames. She crafted numerous specialties such as Minnesota Wild Rice soup and bread pudding thus developing quite a loyal following. Moving to Ames in 1973 her and Bubby hopped on board with the bowling craze by joining a group of six other couples. This new group formed the “card club” which still is going strong after half a century. Card club was a tight-knit group of ladies who traveled, shopped, played cards once a month, and basically swapped stories and laughs. Having her knee replaced twice on the same leg, didn’t curtail travel to Branson (MO), Montreal (Canada), New York City, Niagara Falls, ocean liner cruising, Rose Bowl parades and games, Disney properties, Alaska (seven times), Los Angeles, Las Vegas, Florida, Minneapolis, just to name of a few. Love of God, Jesus, church, and family were paramount. Being an ordained priest in Community of Christ church enabled her to assist missionary elder husband in spreading the gospel while ministering in the Marshalltown congregation. Embracing the gospel began by teaching Sunday school to pre-schoolers for many years, leading the church’s women’s group, sharing at Bible study, preparing food with other ladies at church functions. When husband, Bubby was tapped as Guthrie Grove Retreat Center caretaker, she delighted in helping at the concession stand, hosting regional and national speakers, cooking and baking for large groups. Autumn was a favorite time of year as NFL and college football season kicked off. She especially enjoyed watching her Pittsburg Steelers #12 Quarterback Terry Bradshaw and #32 Running Back Franco Harris. Saturday afternoons were spent cheering on Iowa State Cyclones. Mary always made people feel comfortable and welcome. She was especially caring which brought out the kindness in others. Unconditional love and non-judgmental were the bedrock lifestyle. No amount of clouds and rain would keep her sun rays from beaming. She was proud of her immediate and extended family along with her friends. Joining Mary in Heaven are her husband (Leonard) who passed on November 14, 2021, parents (Helen and Lawrence Davis), sisters Jan (Bob) Springer, Donna (Jerry) Trainer, Shirley Groat, brother Denny Davis, parents in-law Leonard and Glendoris Jordison, sister-in-law Karen (Don) Jordison, niece Jeanette (Daniel) Kirsch, other family members and friends. Keeping her memories alive are son Steven (Paul), son Jeffrey, daughter Cynthia (Mark), cat Patches, brothers and sisters in-law, in addition to a host of nieces, nephews, cousins, other family members and friends. Mary’s family wishes to share their deep appreciation to Dr. Bradley Jordison (McFarland Clinic), Rolling Green Village staff (Nevada) and Suncrest Hospice for their loving care. Memorial contributions should be designated to Paws and More or Alzheimer research. Mailed memorials should be sent to Steven Jordison, 2104 Windfield Dr., Ames, IA 50010. A service honoring Mary’s life will be 12:00 p.m. on Saturday, February 26, at the Gunderson Funeral Chapel in Fort Dodge. Interment will follow in Memorial Park Cemetery. Visitation is 11:00 a.m. until service time on Saturday at Gunderson’s.

Wednesday, February 16, 2022, Mary Frances Jordison peacefully journeyed into her Savior&#8217;s loving embrace guided by her husband of 62 years. Mary journeyed the past eight years with dementia supported by family and friends. The past 18... View Obituary & Service Information

The family of Mary Frances Jordison created this Life Tributes page to make it easy to share your memories.

Send flowers to the Jordison family.