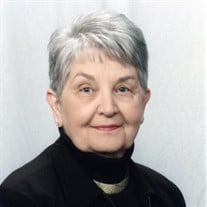 Naida Louise Helm, 95, of Fort Dodge, died on April 11, 2020 at the Paula J. Baber Hospice Home in Fort Dodge, IA. A celebration of life will be held at a later date. Arrangements have been entrusted to Gunderson Funeral Home and Cremation Services. Naida was born December 27, 1924 in Branford, PA to Charles and Margaret Brandow. She lived in Bradford, PA, with her parents and siblings, Robert, Howard and Catherine. Upon the death of her mother from tuberculosis, Howard, Robert and Naida went to live with their grandmother in Olean, NY. Catherine was adopted by another family member. At the age of 7, Naida boarded a train in Olean, NY and traveled alone to Cedar Rapids, IA where she was met by adoptive parents, David and Marie Williams. She was later joined by her brothers, Robert and Howard in Cedar Rapids, who were adopted as well, joining Naida and Bill, another adopted child in the family. After graduating from Roosevelt Senior High in 1942, she graduated from Mount Mercy Junior College in 1944. After graduation she worked in the chemical lab at Collins Radio doing chemical analysis work. During this time, she met a young Naval Cadet, Edwin Heaton. They were married on September 26, 1944 in Pensacola, FL. They were blessed with 4 children. Naida and Ed later divorced. In May 1970, Naida was united in marriage to Adolph Helm in Las Vegas, NV. During their marriage they traveled extensively, played golf, and danced to big band music. Their greatest joy was spending time with their grandchildren and watching their activities. In 1957, Naida started her career with Frank N. Magid Associates as his first employee. She grew with the company as it became an international marketing and research company for television and radio, becoming one of the company’s first vice presidents, later, having a conference center named after her and becoming a partner in their state of the art facility, One Research Center. Naida retired after 40 years with the company and moved to Fort Dodge to be near Adolph, who was in a care facility, and her daughter, Denise and her family. Naida will be remembered for her generosity and loving nature. She had a passion for clothes, shoes and jewelry. She had multiple talents including needlework, painting and mastering any challenge that was placed in front of her. Naida will be dearly missed by her 3 children and their families: Ed (Katherine Stewart) Heaton of Walnut Creek, CA; David Heaton of Gallatin, TN; Denise (Ed) Smith of Fort Dodge, IA.; 10 grandchildren: Stacey Heaton (Wayne Spearse) of Pollock, CA; James Heaton (Lindsay) of Walnut Creek, CA; Gina (Tim Winnegar) Spiers of Castro Valley, CA; Wendi (Carlos Oropeza-Legorreta) Spiers of Fiddle Town, CA; Sarah (Dean) Orial of Evans, GA; Robin (Craig) Christofferson of Granite Bay, CA; David Heaton Jr. of New York, NY; Sharon Heaton of Atlanta, GA ; Shannon (Vaughn) McQuillen of Fort Dodge, IA; Ryan (Jessica) Smith of Fort Dodge, IA. There are 15 great grandchildren and a great-great grandchild. She was preceded in death by her birth and adoptive parents, 4 siblings, spouse and son, Michael.

Naida Louise Helm, 95, of Fort Dodge, died on April 11, 2020 at the Paula J. Baber Hospice Home in Fort Dodge, IA. A celebration of life will be held at a later date. Arrangements have been entrusted to Gunderson Funeral Home and Cremation... View Obituary & Service Information

The family of Naida Helm created this Life Tributes page to make it easy to share your memories.

Send flowers to the Helm family.