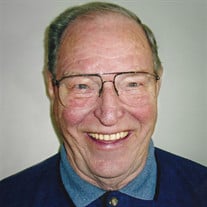 Robert “Bob” Cobb went to spend eternity with Jesus on February 3rd, 2020. He was reunited with his wife, Marjorie “Tudy” Cobb. He probably told her he was glad he got a break from her constant chatter, but was glad to see her nonetheless. He likely walked through those pearly gates in an Iowa sweatshirt, white undershirt, jeans, and slippers with his dogs right beside him. Smiling knowing that his dreaded wrist bracelet to keep him safe these last few years was finally gone. As the story goes, Bob married Tudy after he convinced her that he was the best option even though she had many suitors. Tudy often joked that he fooled her, but she stuck it out 66 years regardless. Bob was “Pop” to 4 children; Victoria Gerhart (Steve), William (Lorraine), Scott (Gloria), and Mitchell. His legacy leaves 13 grandchildren and many great grandchildren. Bob was a hard worker and, along with his wife, took great pride in the roles he played at Hormel and Heinz If you were fortunate enough to know Bob, you may have been the brunt of a few zingers. At times you didn’t even realize it until he got that mischievous grin on his face. His chuckle, especially when he was being ornery, was one that you couldn’t help but laugh right along with him. He was quick-witted and you knew you had to be on your A game when you were around him. Bob was “book” smart, and possessed common sense. No one could rival his crossword puzzle skills. He was a lifelong learner who naturally knew how to fix things and if he didn’t, he wasn’t afraid to give it a try. His sense of humor was one of a kind and you can see it in his kids, grandkids, and great grandkids. He loved to garden, talk religion and politics, take vacations with and to see his grandkids, watch Iowa play any sport, working out crosswords in his recliner, and take walks with his dogs. He was a grandfather that prayed with his grandchildren and wanted them to love Jesus as much as he did. He lived a full and long life, just shy of 92 years, and in turn many were fortunate to know and love him. Bob may be gone from this earth but the impact he made and the stories he told will be with his loved ones forever. A Celebration of Life for Robert “Bob” Cobb will be held at 1pm on Monday, March 2, 2020 at Gunderson Funeral Home and Cremation Services. A visitation will be held from 11:30-1:00 p.m. on Monday, March 2, 2020 at Gunderson’s. Burial will take place at Rose Hill Cemetery in Eagle Grove, IA. Again Jesus spoke to them, saying, “I am the light of the world. Whoever follows me will not walk in darkness, but will have the light of life.” John 8:12

The family of Robert "Bob" Cobb created this Life Tributes page to make it easy to share your memories.

Send flowers to the Cobb family.