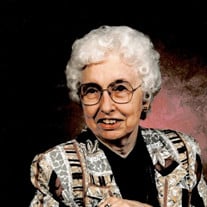 Rowena J. Bastian, 96, of Fort Dodge, died Friday, February 28, 2020, at the Paula J. Baber Hospice Home. A service honoring Rowena’s life will be 10:30 a.m. Wednesday, March 4, at Trinity United Methodist Church with the Rev. L.J. Hartley officiating. Interment will follow in Newark Township Cemetery. Visitation is 5:00 to 7:00 p.m. Tuesday at Gunderson Funeral Home & Cremation Services. Memorials may be left to the discretion of the family. Rowena is survived by her daughter Jane (Dennis) Patterson; son-in-law Don Sampson; grandchildren, Charles “CP” (Terri Eggleston) Patterson, Jennie (David Johnson) Klennert, Lacey (Josh Scanlan) Sampson and Kelsey (Erik) Bond; great grandchildren Pierce and Kamden; siblings, Jesse “Jack” Jergensen, Dorothy Humphrey and Shirley Detmering. She was preceded in death by her parents, her husband, her daughter Nancy Sampson and her siblings, Emmett, Jim, Irwin “Bill” and Geneva. Rowena Jeanette Jergensen, the daughter of Jess and Dorothy (Wetter) Jergensen, was born August 7, 1923, near Holmes, Iowa. She graduated from Eagle Grove High School and attended AIB in Des Moines, where she also worked for the Des Moines Register and Tribune. On May 26, 1945, Rowena was united in marriage to Charles Bastian. They lived in Wright County near Vincent, where they farmed. Chuck passed away in 1968. After moving off the farm, Rowena was employed at the Vincent bank, until retirement. Rowena was a member of the former United Methodist Church at Vincent and Trinity United Methodist Church in Fort Dodge. She was active in quilting with her church group. She enjoyed reading, making clothes for her family, sewing, baking, making candies and cooking for her family. Rowena was a 4H leader, enjoyed her card club, playing board games with her grandchildren, genealogy and camping with her family.

The family of Rowena Jeanette Bastian created this Life Tributes page to make it easy to share your memories.

Send flowers to the Bastian family.