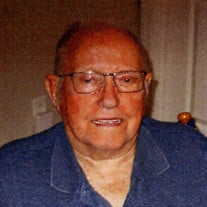 Vernon Ernest Sindlinger, 90, of Cedar Rapids, IA formerly of Fort Dodge, went home to be with the Lord on March 23, 2022. Services will be 10:30 AM on Saturday, March 26, 2022, at St. Paul Lutheran Church in Fort Dodge. A time of gathering of family and friends will be from 9:30 AM until the time of service on Saturday at St. Paul Lutheran Church. Gunderson funeral Home & Cremation Services are in charge of arrangements. Vernon Sindlinger was born on April 7,1931. He was the second oldest child born to Ernest C. and Anna (Fredrickson) Sindlinger. He had three siblings that are deceased, Archie and Ray Sindlinger and one Sister, Delores Rutter. One brother, Leroy (Linda) Sindlinger lives in Ft. Dodge, Iowa He hauled milk for Oberg Dairy, in Ft. Dodge before working for Ft. Dodge Machine Supply where he retired after 34 years of Service. While on a blind date he met the love of his life, Patricia Trapp. They had attended the County Fair in Manson, Iowa with several other friends before going to a skating rink in Fort Dodge. They were married at St. Pauls’ Lutheran Church in Ft. Dodge on June 4, 1954. Vern and Pat are the parents of three children. Willian Sindlinger (Karen) of Cedar Rapids, Susan Johnson (Carey) of Oregon, and Robert Sindlinger (Melissa) of Texas. They have 6 grand children and 6 great grandchildren. Some of Vern’s’ favorite past times included going fishing, Bowling, Playing Horseshoe, Reading and Traveling. They have done a lot of traveling throughout the United States. They have also traveled to Germany, Switzerland, and Holland. They have also taken numerous cruises. After retirement Vern & Pat moved to Mesa, Arizona to be closer to Pat’s parents. They later returned to Iowa, (Cedar Rapids) to be closer to their son and his family. The most important things in Vern’s life were his Wife and Family. He has always tried to set good examples for his kids. He also worked hard f or his employers which gave him a secure future. He enjoyed his new retirement home at Prairie Gardens where he met many new friends.

Vernon Ernest Sindlinger, 90, of Cedar Rapids, IA formerly of Fort Dodge, went home to be with the Lord on March 23, 2022. Services will be 10:30 AM on Saturday, March 26, 2022, at St. Paul Lutheran Church in Fort Dodge. A time of gathering... View Obituary & Service Information

The family of Vernon Ernest Sindlinger created this Life Tributes page to make it easy to share your memories.

Send flowers to the Sindlinger family.